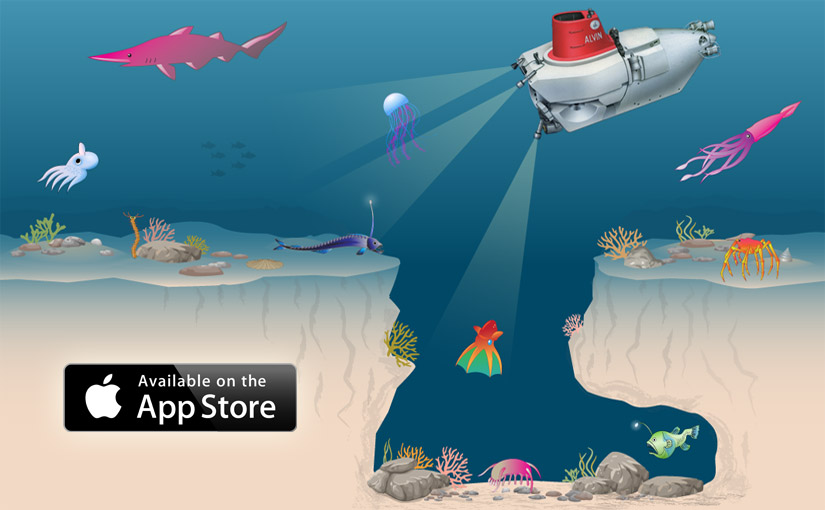 Tako Octo’s Deep Sea Adventure is an exciting game (watch new trailer video) designed to teach kids and adults about animals that live in the deep ocean. While playing the deep sea game app you will maneuver a cute dumbo octopus named Tako Octo® as he explores his deep underwater world. Learn about such exciting animals as the goblin shark whose jaw full of teeth literally jump out of their mouth. Find a vampire squid that emits bioluminescence mucus from it’s tentacles. Eat bristle worms or zooplankton and avoid predators to stay alive as you discover other animals that live in your environment. Explore trenches in the abyss and midnight zones which are the deepest parts of the ocean.

The following are a few of the animals you will learn about in this game:

New levels added that explore the threats to our oceans from pollution and destruction of the sea bed.

The game is built for iOS so it works on both ipad and iphone.

Learn more about the game at Almega Brainware.

The scary looking goblin shark lives in the waters off the coast of Japan. It’s able to shoot its protruding jaws forward to snatch up prey. When feeding in this manner, they look more like something out of an alien movie than a shark.

The goblin shark’s most conspicuous physical features are the long snout (called a rostrum) and the teeth.

Live goblin sharks have only rarely been observed and almost never filmed, so most of scientists’ knowledge of this species is a result of their accidental capture in fisheries targeting other species. They are believed to be active predators and to take some fishes, as well as squids and pelagic crustaceans.

The goblin shark is not fished commercially, and is only rarely captured accidentally in fisheries targeting other species. Based on a recent analysis, scientists believe the goblin shark to be a species of least concern. 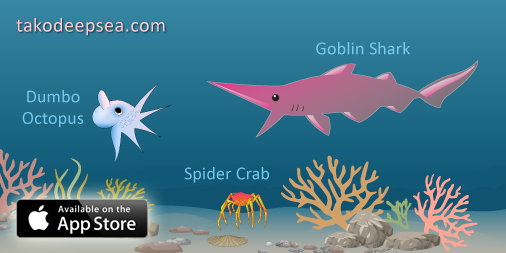 Dumbo octopuses move by slowly flapping their ear-like fins, and they use their arms to steer.  They are foraging predators and eat pelagic invertebrates that swim above the sea floor.  As there are few large predators in the deep sea, dumbo octopuses’ primary predators are diving fishes and marine mammals, including tunas, sharks, and dolphins.  Due to their preference for extreme depths, they are only very rarely captured in fishing nets.

She’s a predator! And she’s less than a foot long with a large mouth full of sharp teeth – and she can’t keep her mouth shut!

One more thing about the Anglerfish – she has a luminescent lure attached to her head to attract her prey!

Scientists believe that these creatures have been around even before the dinosaurs. What’s really interesting is that they are not considered a fish at all because they have no eyes, ears, nose, bones, a spine, a brain, head, or even a heart! Their body is made out of 95% water. If they’re out of the water, they are nothing but one big blob! Talk about their tentacles, they can be as small as 25 mm, but can be as long as two basketball courts, or about 61 meters! Their diet is small fish and zooplanktons.

Other species of jellyfish are among the most common jellyfish predators, some of which specialize in jellies. Other predators include tuna, shark, swordfish, sea turtles, and at least one species of Pacific salmon.

The giant spider crab is the largest known species of crab and may live up to 100 years. Populations of this species of crab have diminished over recent years and there are many efforts to protect them.

The Japanese spider crab has the greatest leg span of any arthropod, reaching 10-12ft, claw to claw. The body may grow to a size of 16 in and the whole crab can weigh up to 42 lb — second only to the American lobster among all living arthropod species. The Japanese spider crab is an omnivore, consuming both plant matter and animals. It also sometimes acts as a scavenger consuming dead animals. Some have been known to scrape the ocean floor for plants and algae while others pry open the shells of mollusks.

Tempe, AZ USA – Almega Brainware’s Team of Developers will be announcing the worldwide release of Tako Octo’s Deep Sea Adventure educational game for the iPhone and iPad, which will be available for download via the App Store.

Designed for ages 5 and older desiring to venture and explore a world that is out-of-reach by humans, Tako Octo’s Deep Sea Adventure is the game for you! It’s an original subaquatic game that will take you down to the depths of the ocean floor. Players guide Tako Octo in search of a deep sea creature being introduced, concluding with finding of his friend, Aiko. It’s an educational game where players unlock level after level and discover a vast array of unique creatures and their fascinating world of the deep. It will enhance player’s knowledge and understanding of how creatures survive in an environment that is unfathomable and unimaginable. Each level is challenging and exciting as Tako Octo evades the predators that lurk within close distance; but all the while, monitoring his health meter to avoid running out of energy and keeping the game level alive! It’s a game of survival; a game of chance; and a game that will make each player jump off their seat helping to defend Tako Octo.

About the Company: Almega Brainware is a U.S. based company with a mission to educate and advance the minds of all individuals through mobile games, utilizing educational materials and curriculum. 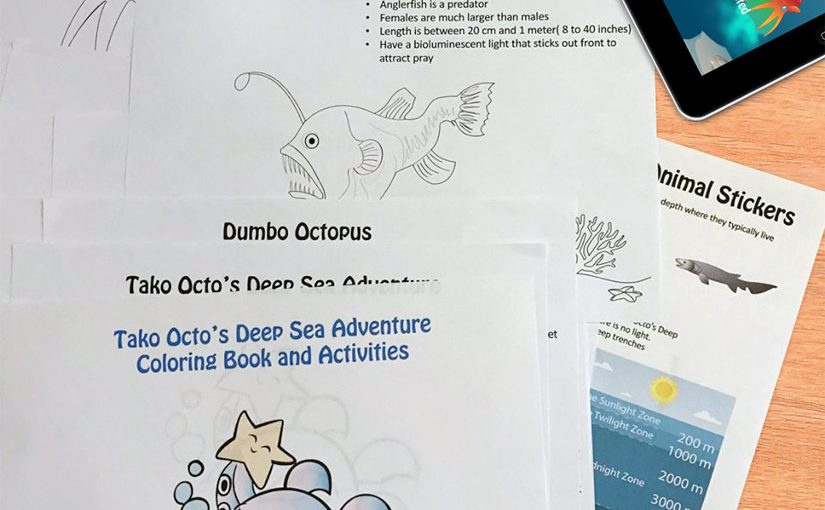 A free activity book can be downloaded containing pictures of the animals with fun facts that can be colored and hints how this can be used in a classroom setting, home school or by an adult with a younger child.